Former SEAL sniper Cody Roberts has returned from Afghanistan with too many demons and a simple wish: to be left alone. Working for K2 Special Services, caring for the war dogs he rescued, playing his guitar—that’s all he wants to do. But Cody is as protective as his nickname, “Dog,” suggests. A man like that can’t sit back when he realizes the beautiful veterinarian next door is being targeted by an unknown enemy.

Riley Austin is desperate to find out who’s poisoning her animal patients, and she’s stunned by her mysterious neighbor’s suggestion that it’s personal. But Cody makes her feel something else, too: a powerful attraction. He insists he’s no good for her, but those haunted eyes and that chiseled body tell Riley that surrendering to their mutual lust is worth the risk. And despite his conditions—no falling for each other, no regrets once it’s over—she’ll fight to love him just as fiercely as he’ll fight to save her.

Only Her is book five of the men of K2 Special Services. 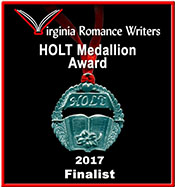